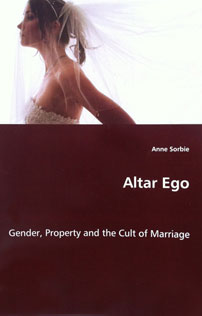 Altar Ego is a book which includes Anne’s Master’s Thesis. It’s in two parts. The first is an academic paper, and the second is a creative writing project: a novel.

Altar Ego is concerned with gender and property.  Calgary and its surrounding landscapes, east and west, provide the setting for this story of a journey made on the Bow River by a much-married daughter and her monogamous mother. Marlo Gilman is a content, self-employed woman in her late thirties and her mother, Bertha, is a volatile, recently widowed sixty-four year old.

Marriage frames this narrative, creating a sub-plot that envelops Marlo and Bertha in a cycle of connections that converge with experiences of birth and death. While the characters examine a variety of marital engagements, Altar Ego focuses primarily on the post-connubial sites that they inhabit.

Although these women seem to stand in opposition to each other, attitudes defined by generational beliefs in family and religion, proprietorship is a vital form of connection between them. Most importantly, both realize that they are irrevocably linked by their sense of self-agency.

Read an excerpt from Altar Ego